SEC adopts new rules for submitting shareholder resolution in US 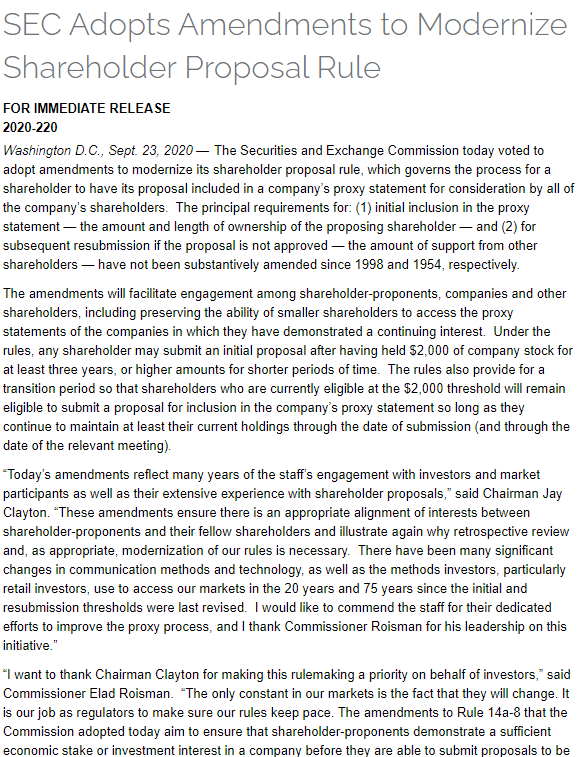 General Meetings / Proxy solicitation Issues for Companies: 2020
Print
Share
Australia has enjoyed relatively few shareholder resolutions lodged prior to the AGMs compared to other markets. Although the number of these types of resolutions has been slowly creeping up over the past few years, it is still quite challenging for a single minority shareholder to lodge a resolution at an ASX-listed company.

The criteria for submitting a shareholder resolution vary from market to market, but typically include specific share ownership held during a specified period. The criteria associated with shareholder proposals in the United States include ownership of at least US$2,000 of common stock for at least one year. Limited to 500 words, the resolution must be submitted at least 120 days before the date of release of the annual proxy statement.

1.    The shareholder must be able to engage with the company between 10 and 30 days after submitting a shareholder proposal to discuss the content of the resolution.
2.    One person may not submit more than one proposal.
3.    The prior shareholder support thresholds also determine a shareholder eligibility to submit a resolution. These are increasing from 3/6/10% to 5/15/25% for matters voted on once, twice or three or more times, respectively, in the past five years if the most recent vote occurred within the past three years.

As currently required, the shareholder must also provide the company with a written statement of his or her intention to continue to hold US$2,000 of voting securities through the date of the meeting for which the proposal is submitted. The amendments will apply to any shareholder proposal submitted for an annual meeting or special meeting held on or after January 1, 2022.