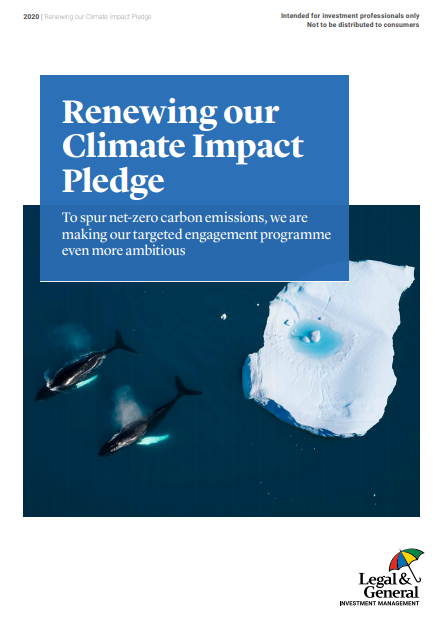 ESG
Print
Share
Legal and General Investment Management (LGIM), the Great Britain’s largest fund manager, has expanded its Climate Impact Pledge to achieve net zero emissions by 2050. LGIM will be assessing 1,000 companies in its portfolio based on a traffic light system with ratings made public on LGIM’s website.

LGIM introduced the Climate Impact Pledge following the commitment of 196 countries and territories to limit the global warming to 1.5-2°C above pre-industrial levels under the 2015 Paris Agreement. The Pledge originally covered climate strategies of 80 of the world’s largest companies across six sectors.

LGIM has a clear message for the companies in which it invests - ignoring climate change is a financial risk. The fund manager will engage with companies, but also vote against companies, and is making public the names of the best and worst performers in their ranking. LGIM also has an option to divest from select funds as another means of sending a powerful message to companies.

LGIM’s strategy focuses on the largest companies in various sectors, including utilities, mining, food, oil and gas, financials, automakers and now also property and transport, among others. The companies are assessed and ranked against a wide range of indicators related to statement on climate, board governance, business strategy, lobbying activities and many others, to gain a well-rounded view of their exposure to climate risks and opportunities. The information for the LGIM’s model is provided by various research sources, including those from Sustainalytics, CDP, Trucost, TPI and InfluenceMap.

LGIM publicly sanctions companies that do not have sufficient disclosures, targets and oversight of climate related risks. These sanctions have escalated the speed with which those companies address concerns. To date, seven of the ten companies that saw the most significant ESG improvements had been sanctioned previously.

The highest year-on-year overall progress improvements are from Australia, Japan and South Korea, echoing research suggesting that some markets have been adopting climate disclosure standards at a faster rate. Interestingly, despite the US’s withdrawal from the Paris Agreement (which came into effect on 4 November 2020), results indicate that the number of US companies expressing public support for the agreement has grown by 94% since 2017.

The 2020 LGIM Climate Pledge report can be found here.