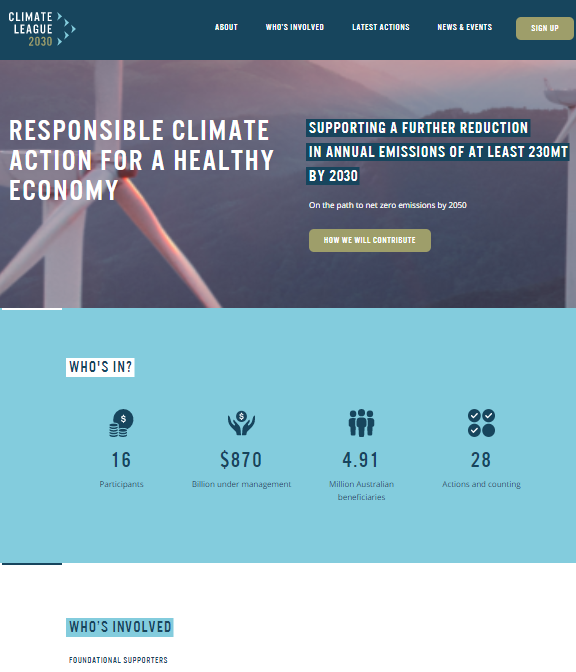 ESG
Print
Share
Australian investors and superfund heavy weights have come together to push for increased action on climate change in an initiative called ‘Climate League 2030’.

Launched in October this year, the League’s aim is to reduce annual greenhouse gas emissions by at least 230 million tonnes by 2030. This represents a 45% reduction in Australia’s emissions compared to 2005, to be on a path to net zero emissions by 2050.

Backed by 16 institutional investors with ~A$870 billion assets under management, and co-ordinated by the Investor Group on Climate Change (IGCC), the group believes in a green COVID recovery. The initiative sets out a ten-year plan to help reduce Australia’s annual greenhouse gas emissions in line with the Paris Agreement, and supports efforts to mitigate the systemic risks that climate change poses to the economy and community.

While the League has currently 16 members, all of whom are investors (and one investor advisory firm), the aim is to expand its participants over the next 18 months to also include banks, insurers and companies. To be a part of the League, organisations must support the initiative’s goal and commit to taking at least one new action each year that will make a demonstrable contribution to reducing Australian emissions. They will also need to report annually on the progress towards their existing commitments and detail how these actions are helping to reduce Australian domestic emissions.

The launch of Climate League 2030 is yet another indication to issuers that climate change risk is influencing all aspects of active ownership, including investment evaluations, engagement priorities and voting decisions.

The initial 16 participants of the Climate League 2030 are listed below: