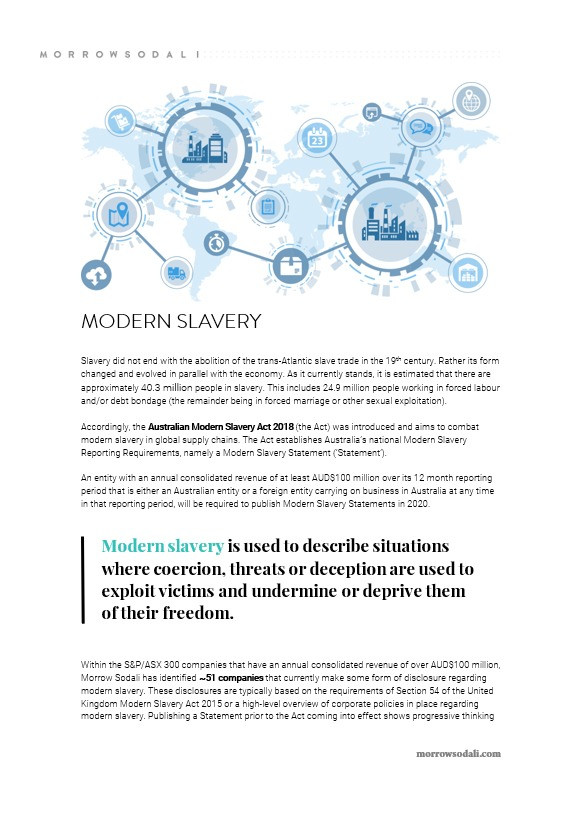 ESG Governance
Download PDF Print
Share
MODERN SLAVERY
Slavery did not end with the abolition of the trans-Atlantic slave trade in the 19th century. Rather its form changed and evolved in parallel with the economy. As it currently stands, it is estimated that there are approximately 40.3 million people in slavery. This includes 24.9 million people working in forced labour and/or debt bondage (the remainder being in forced marriage or other sexual exploitation).

An entity with an annual consolidated revenue of at least AUD$100 million over its 12 month reporting period that is either an Australian entity or a foreign entity carrying on business in Australia at any time in that reporting period, will be required to publish Modern Slavery Statements in 2020.

Within the S&P/ASX 300 companies that have an annual consolidated revenue of over AUD$100 million, Morrow Sodali has identified ~51 companies that currently make some form of disclosure regarding modern slavery. These disclosures are typically based on the requirements of Section 54 of the United Kingdom Modern Slavery Act 2015 or a high-level overview of corporate policies in place regarding modern slavery. Publishing a Statement prior to the Act coming into effect shows progressive thinking on the issues. However, it also means that many companies will need to amend their disclosures to ensure their Statements reflect the seven mandatory requirements of the Act.

Morrow Sodali has also identified ~136 companies that are required to report under the Act, of which do not currently make any form of Modern Slavery disclosure or have not indicated their indent to disclose. In addition, Morrow Sodali has identified ~54 companies that intend to report in the near future. Where an entity does not comply with the requirements of the Act, an explanation may be required and/or remedial action may be enforced.

How can Morrow Sodali help?
Our dedicated governance team can work with you to: